The Garden Route is a popular and scenic stretch of the south-eastern coast of South Africa. It stretches from Mossel Bay in the Western Cape to the Storms River which is crossed along the N2 coastal highway over the Paul Sauer Bridge in the extreme western reach of the neighbouring Eastern Cape. The name comes from the verdant and ecologically diverse vegetation encountered here and the numerous lagoons and lakes dotted along the coast. It includes towns such as Knysna, Oudtshoorn, Plettenberg Bay and Nature's Valley; with George, the Garden Route's largest city and main administrative centre.

The coast is dotted with excellent beaches, while inland you’ll find picturesque lagoons and lakes, rolling hills and eventually the mountains of the Outeniqua and Tsitsikamma ranges that divide the Garden Route from the arid Little Karoo. The ancient indigenous forests that line the coast from Wilderness to Knysna offer adventure trails and hiking, birdwatching, canoeing on the rivers, sliding through the tree canopy or simply taking an easy walk through the forest to gasp at the size of a yellowwood tree over six hundred years old. Wildlife enthusiasts will enjoy spotting brilliant green and red Knysna louries in the forest or maybe even catching sight of one of the few remaining Knysna elephants.

With such a diverse range of things to do in this internationally renowned region, it’s not surprising that the scope of the accommodation comes up trumps. In fact, strong competition in the tourist industry has led to high standards in everything from activities to restaurants. The downside of this is the high volume of people in the most popular towns of Knysna and Plettenberg Bay. While they make good bases for exploring the area, they can get very crowded during December and January, when prices rise significantly. This makes it important to book ahead if you’re travelling at these times, or head for less crowded Wilderness
It has an oceanic climate, with mild to warm summers, and mild to cool winters. It has the mildest climate in South Africa and the second mildest climate in the world, after Hawaii. Temperatures rarely fall below 10°C in winter and rarely climb beyond 28°C in summer. Rain occurs year-round, with a slight peak in the spring months, brought by the humid sea-winds from the Indian Ocean rising and releasing their precipitation along the Outeniqua and Tsitsikamma Mountains just inland of the coast.

The Route is sandwiched between the aforementioned mountains and the Indian Ocean. The Outeniqua and Tsitsikamma indigenous forests are a unique mixture of Cape Fynbos and Temperate Forest and offer hiking trails and eco-tourism activities. Nearly 300 species of bird life are to be found in a variety of habitats ranging from fynbos to forest to wetlands.

Ten nature reserves embrace the varied ecosystems of the area as well as unique marine reserves, home to soft coral reefs, dolphins, seals and a host of other marine life. Various bays along the Garden Route are nurseries to the endangered Southern Right Whale which come there to calve in the winter and spring (July to December). 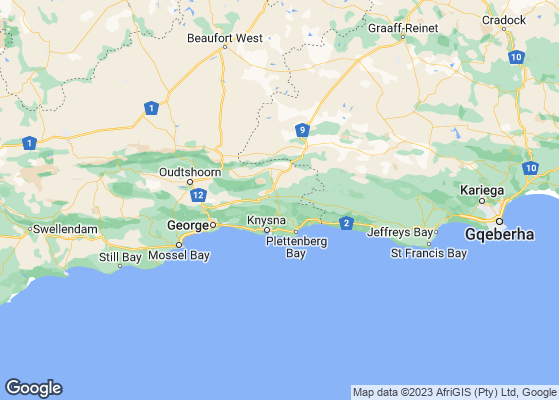